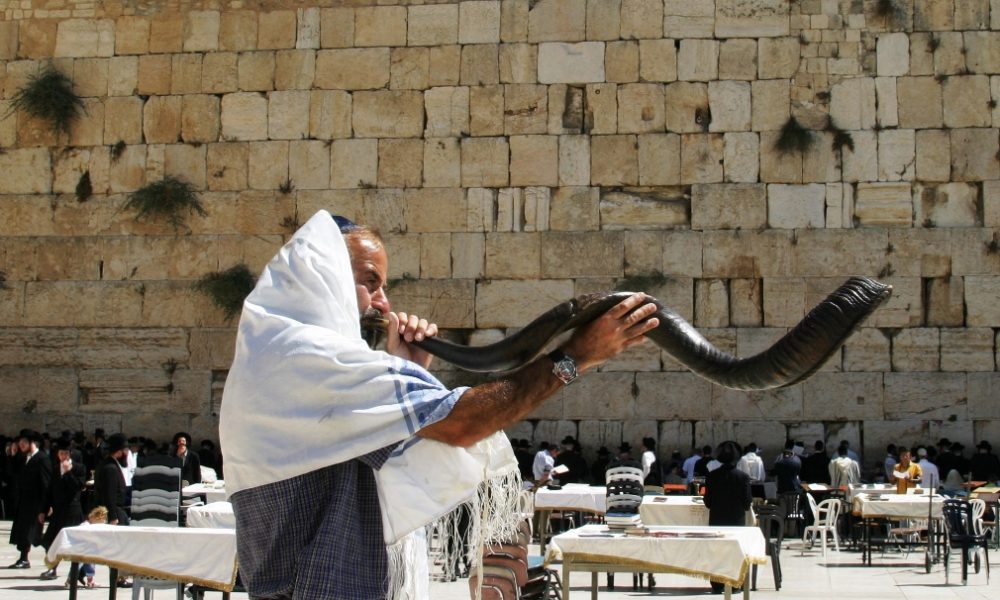 Before the Jewish New Year the sound of the shofar is heard in Jerusalem every day for a whole month. On Rosh HaShanah itself before the blowing of the shofar, Psalm 47 is recited: „Oh, clap your hands, all you peoples! Shout to God with the voice of triumph! For the Lord Most High is awesome; He is a great King over all the earth… God has gone up with a shout, the Lord with the sound of a shofar“(Psalm 47:1,2,6). Once more the shofar is heard at the conclusion of the Day of Atonement, the Yom Kippur.

The shofar, the ram’s horn, is an ancient musical instrument, one of the oldest musical instruments at all. What makes it even more special is that its sound is connected to the biblical message and faith in God as Creator and King of this world. He is a God who speaks to His people and He answers them. He is a God that wants to be heard.

The Hebrew expression “shofar”, usually translated as “trumpet,” is often found in the Bible in connection with the word “voice” or “sound”. This “voice” is supposed to draw attention to the fact that God speaks, but also that He is worthy of praise and joyful worship.

It is not easy to elicit a melody from an instrument that is made from the horn of an animal. It rather makes noises. An expert, however, may be able to create different tones of different lengths by blowing it. The call to sound the shofar appears repeatedly in Scripture. The Lord even commanded His people to celebrate a festival of blowing their horns (Numbers 29:1). That is why shofar blowing is firmly rooted in Jewish tradition. The Jewish New Year, Rosh HaShanah is unthinkable without the shofar.

There is evidence from the extermination camps Auschwitz and Bergen-Belsen that Jews risked their lives, but managed to smuggle in shofars and blow them on Rosh HaShanah. Even at those terrible places the sound of the shofar was heard. The shofar from Auschwitz then accompanied the Jewish people on the death march. Later it was taken to Israel. Today it is on display in the Museum of Jewish Heritage in New York. The shofar from Bergen-Belsen was rediscovered a few years ago in a village in Samaria.

The tradition of shofar blowing has evolved over time. Rabbis have discussed it at length. Today we are mainly talking about three tones: “tek’iah”, “teru’ah” and “shevarim”. Two of these names come from the Bible. “Tek’iah” is a long blast. In the Bible we find the expression to make the shofar sound with such a drawn out sound. “Tru’ah” is a series of quick short blasts. The third term “shevarim” comes from Jewish literature and literally means “broken pieces.” Shevarim are medium-length wailing sounds that are supposed to remind of the brokenness of a person regretting his transgressions.

Nowadays these lower and higher tones of different lengths are combined according to a precise pattern: “tek’iah – tru’ah – tek’iah,” “tek’iah – shevarim – tek’iah,” and “tek’iah – shevarim – tru’ah – tek’iah.” The commandment to keep a “day of blowing” without mentioning the shofar but talking about a remembrance is found in Leviticus 23:24. It may be good to remind us of a couple of biblical passages where the shofar is mentioned.

For the first time a mighty sound of the shofar was heard on Mt Sinai, when the people of Israel stood at the foot of the mountain. There were thunders and lightning. Moses spoke to God and He answered audibly. The description of this scene, as the shofar’s blasts became louder and louder, indicates that the sound of the ram’s horn came directly from heaven. A very similar description is found in the prophet Zechariah: “Then the Lord will be seen over them, and His arrow will go forth like lightning. The Lord God will blow the shofar, and go with whirlwinds from the south” (Zechariah 9:14).

At the sound of the shofar the walls of Jericho fell (Joshua 6). The ram’s horn sounded when Solomon was anointed king (1 Kings 1:41). The shofar also had the function of a military trumpet. A special feature in this case is pointed out by Nehemiah: “Our God will fight for us!” (Nehemiah 4:14).

In the words of biblical prophets the shofar proclaims judgment, calls to repent and warns: “‘Listen to the sound of the shofar!’ But they said, ‘We will not listen.’“ (Jeremiah 6:17; compare Ezekiel 33:4-5). The ram’s horns sounded joyfully when the ark of the Lord was brought to Jerusalem (1 Chronicles 15:28).

In the Psalms we find calls to celebrate God with music, singing and the sound of the shofar. The “New Year’s Psalm” 47 mentioned above is particularly striking. Psalm 98, which is also a call to praise God with the sound of the shofar, expresses a joyful expectation of nature and men that the Lord the King may come as judge and establish His righteousness that is so much lacking in this world.

According to Jewish tradition, the voice of the shofar should be heard for the entire month of Elul. In its wailing but also in the joyful sound, we may recognize all the different aspects. That is why the shofar is able to speak to each of us individually.

Its message during a time of pandemic is: “Yes, it is time to repent!” However, it is also possible to rejoice because God who rules the world is the One who revealed himself on Mt Sinai as “merciful and gracious, longsuffering, and abounding in goodness and truth, keeping mercy for thousands, forgiving iniquity and transgression and sin, by no means clearing the guilty, visiting the iniquity of the fathers upon the children and the children’s children to the third and the fourth generation” (Exodus 34:6).