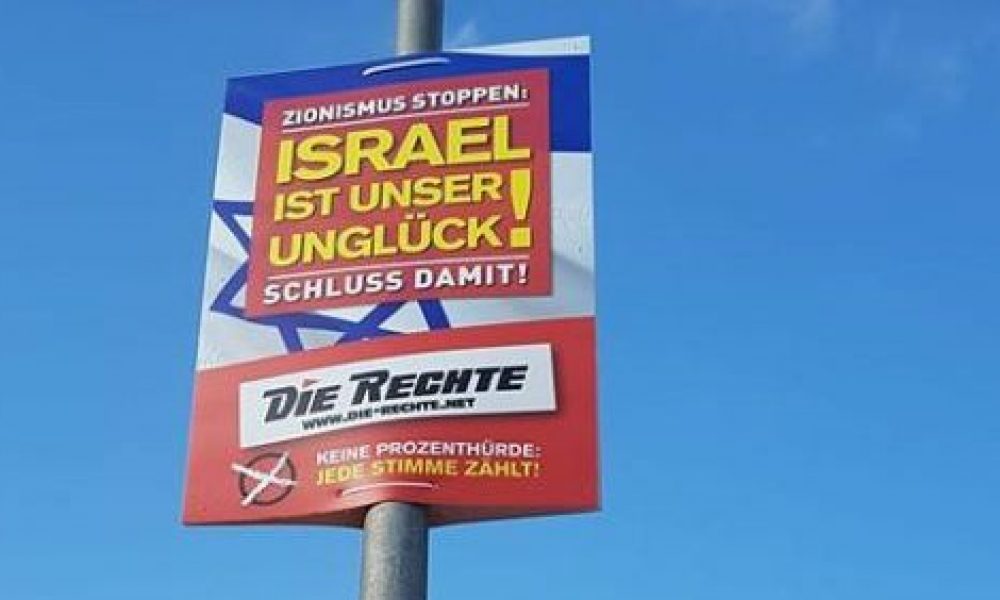 Ever since the Jewish people have existed, they have experienced a strange rejection. In fact, there have always been Gentiles who have conspired: “Come, let us wipe them out not to be a nation any more. Let the name of Israel be remembered no more!” (Psalms 83:5). This hatred of one nation is unique. Even in countries where there are no Jews, it is detectable.

In the course of history, this feeling has shown an interesting adaptability to the respective political correctness of a time, culture or society. This may be seen looking at the reasons that have been given to justify the ever unchanged Judaeophobia.

Mutations of hatred of the Jews

The pharaoh of ancient Egypt felt demographically threatened by his Hebrew slaves. He feared that they could become the “fifth column” in the event of war (Exodus 1:8-10). The Persian Grand Vizier Haman justified his extermination project with the fact that the Jews had laws that differed from those of all other peoples (Ester 3:8). Martin Luther justified his opposition to the Jewish people religiously. Within the framework of this reasoning, a Jew could still save himself by conversion.

In the 19th and 20th centuries, the age-old hatred of Israel mutated into anti-Semitism. This approach justified the fight against the Jewish people in the blood and in the genes. No person of Jewish descent can escape the persecution.

In the second half of the 20th century, no Western European was able to call himself an anti-Semite any more with a good conscience. Therefore the Soviet Propaganda Ministry deliberately introduced the concept of anti-Zionism. Since then Judaeophobia has been directed against the political expression of the Jewish people. This justification is very convenient because the one who nurtures negative feelings towards Jews does not have to blame himself of religious bias or even racism.

But the eternally unchanged patterns of thinking often reveal themselves when old slander is rehashed. In the Middle Ages blood libels accused Jews of slaughtering Christian children for the production of their matzah. Today it is sometimes claimed that the Israeli military deliberately murders Palestinian children. And where it was claimed a thousand years ago that Jews poisoned the wells of Europe, the rumors are being spread today that settlers contaminate the water of the Palestinians.

However, you do not need intellectual sophistication in order to realize: The ancient ghost Judaeophobia is alive and well in Europe. Racist notes, insulting emails, anti-Semitic slogans at football matches or just remarks in passing, graffiti, and the desecration of memorials and cemeteries are obvious symptoms.

Thus, on May 1, 2019, in Frankfurt am Main a Jewish businessman was called a “shitty Jew”. On May 6 in Hamm, the Left-Wing Youth of North Rhine-Westphalia demanded on Facebook the complete annihilation of the state of Israel. On May 10, an Israeli flag was burned in Berlin at the memorial site for victims of a terrorist attack. On May 18, the political party “The Right” played sound recordings of a multiple-convicted Holocaust denier in front of the synagogue in Pforzheim. On the same day, the house of a Jewish couple in Hemmingen, Lower Saxony was targeted with an arson attack.

On June 1, a young Jewess in Berlin-Charlottenburg was told: “Actually, Hitler should return and kill the rest as well.” On July 13, in Freiburg, a man harassed the chairwoman of the Jewish community: “I’m not surprised that Hitler gassed you, you idiots.” And: “Off with you! Otherwise I’ll kill you, you whore!” On August 10, a man with a Star of David chain was insulted by employees at Berlin’s Tegel Airport and thrown off a flight. Three days later, a Jew in Charlottenburg was knocked to the ground by two men. Eyewitnesses did not intervene, according to the victim.

In September, a young man talking in front of a discotheque in Hebrew is slapped in the face in Berlin. Despite a ban on performing for two anti-Semitic rappers, 500 people take part in an anti-Israel rally in the German capital in the same month. In a football match in Frankfurt am Main, the Israeli referee is called “Judensau”.

When a heavily armed man tried to intrude into a synagogue in Halle on the Saale on October 9, no Jewish person who knows Germany was truly surprised. The plan of the violent offender failed because the Jewish community had taken good security precautions. But two passers-by were murdered.

Anyone who wears a kippah or a Star of David in the German public of the 21st century, speaks Hebrew, shows an Israeli flag or otherwise shows his attachment to the Jewish people, must expect to be offended, insulted, threatened, stoned or beaten. In 2019, Jews in the Federal Republic of Germany were denied access to restaurants and they got to see the Hitler salute.

A statistic of the German Federal Criminal Police Office lists 442 criminal offenses between January and June 2019 with anti-Semitic background. The “Recherche- und Informationsstelle Antisemitismus” (RIAS – Research and Information Center Anti-Semitism) monitors the situation in Germany and registers the cases that are reported to it. On October 24, 2019, the German daily DIE WELT published a list of eighty incidents that had occurred between January 1 and October 9, 2019, the Yom Kippur of the year 5780 (according to the Jewish calendar “since the creation of the world”), when the violent incident in Halle marked a new low. The renowned newspaper concludes: “Hatred of Jews is everyday life in Germany”.

Before the attack in Halle, 1,300 people in Germany were interviewed on behalf of the Jewish World Congress. The study found that 27 percent of Germans foster anti-Semitic feelings. 41 percent opined that Jews talk too much about the Holocaust, have too much power in the economy, or are responsible for most of the wars in the world.

The anti-Semitism commissioner of the Federal Government, Felix Klein, reaches the conclusion: “Anti-Semitism was always present in bourgeois circles in Germany. But today people are more open.” Israel-related anti-Semitism in Germany is 40 percent. The methods of the Israeli government are equated with what the National Socialists did to the Jewish population in Europe.

The aversion to the Jewish people, their faith, their culture and their state permeates all areas of daily life in Germany. Socially, this antipathy is difficult to locate. The perpetrators of the anti-Semitic incidents listed above are academics and craftsmen, nobles and commoners, soccer fans, ordinary passers-by, bus and taxi drivers, policemen and politicians.

Imported hatred of the Jews?

Frequently it is heard that migrants from Islamic countries have imported a new anti-Semitism into German society. It is true of this claim that deep-seated Judaeophobia is a crucial factor in the Middle East conflict over the modern state of Israel. Interestingly enough, this is hardly verbalized by Middle Eastern experts, politicians and diplomats.

As a matter of fact, Arab governments and their diplomats are often “more Israel-friendly” than the population whom they represent. For example, Palestinian negotiators had to fear for their lives when the Qatari news channel Al-Jazzeera published in January 2011 what concessions they had been prepared to make to the Jewish state. It is a fact that both the practice of forcing Jews into ghettos and the labeling with a yellow piece of cloth have their origins in the Arab world.

But we should not turn historical developments upside down. Islam has learned much from Christianity when it comes to the hatred of Jews, and possibly even accepted much of its reasoning in this field. This includes the Christian motive of deicide. Islamic tradition claims that Mohammed was poisoned by a Jewess. However, it is also true that Christianity was not the author of the phenomenon of Judaeophobia. Many prejudices and practices Christians in ancient times have taken over from their pagan environment that was anything but friendly to the Jews.

However, this raises the question we can pose to modern Germany as well as to ancient Christianity: why did they prove over and again to be so susceptible to the hatred of the Jews?

Moreover, in the German public today, people with a migration background are openly explicit against anti-Semitism. For example the foreign policy spokesman for the FDP faction, Bijan Djir-Sarai, has repeatedly raised the issue that the policy of the Federal Government of Germany to Israel is in need of correction. Also the psychologist Ahmad Mansour shows an admirably intrepid campaign against racism, bigotry and xenophobia.

Judaeophobia is an ongoing issue in the state of Israel, which sees its raison d’etre being a safe haven for persecuted Jews. One wonders what an election victory of Labor under Jeremy Corbyn could mean for Britain’s Jews. Attention wins when the Trieste city councilor Fabio Tuiach claims it is “offensive to Christians to call Jesus a Jew”. Donald Trump’s connections to the right-wing nationalist scene in the United States are an issue, as well as the encouraging message that the French parliament condemned anti-Zionism as a form of anti-Semitism.

Of course, the BDS movement has been analyzed for years, gaining influence above all at American universities with its explicitly anti-Israeli rhetoric. It becomes clear: “Antisemitism is no longer the exclusive province of the far Right; it has taken hold on the political Left, in which individuals claiming to hold anti-racist views employ antisemitic narratives in the course of their disapproval of the policies of the State of Israel.”

Nathan Sharansky was a “prisoner of Zion” in the Soviet Union, served as a minister for various resorts in the Israeli government, and most recently as chairman of the Jewish Agency Executive for nearly ten years. The chess genius developed a “3-D test” to show when legitimate Israeli criticism becomes anti-Semitism: When the Jewish people and their state are demonized, delegitimized or if a double standard is applied.

The modern Orthodox Rabbi Pesach Wolicki is involved in Christian-Jewish dialogue. He observes a transition in the anti-Jewish polemic of Christian theologians. Martin Luther had made fun of Jews who insisted that one day they would return to the land of Israel. For Luther it was clear that this would never happen – so clear that he could commit himself sarcastically: “If that happened, they should soon see us on their heels and also become Jews.”

“What would Luther’s theology of the Jews have been,” Wolicki asks, “had the current State of Israel existed in his time, prosperous and populated by millions of Jews ingathered from the four corners of the earth? I’m not suggesting that Luther would have made good on his promise to convert to Judaism. But would he have made this statement in this way? Certainly not.”

Wolicki observes that Christian theologians are no longer able to ridicule the hope of the Jewish people to return to their ancient home. The state of Israel is a fact. Christian criticism of the Jewish right to exist now must attach the lever elsewhere: It questions the continuity of the people of Israel from Biblical times to the present day. “I don’t think the Old Testament nation of Israel and the present-day nation of Israel are equivalent. Nor should they be in my estimation”, the General Presbyter of one US state writes.

The continuity of the Jewish people is a historical fact. Nevertheless, those who have a theological problem with the existence of the people of Israel seem to be left with only the possibility to doubt this proven lineage. “Rather than argue that the church has replaced Israel,” Rabbi Wolicki analyizes, “they argue that there is no Israel at all.”