Run-Up to the Knesset Elections 2019 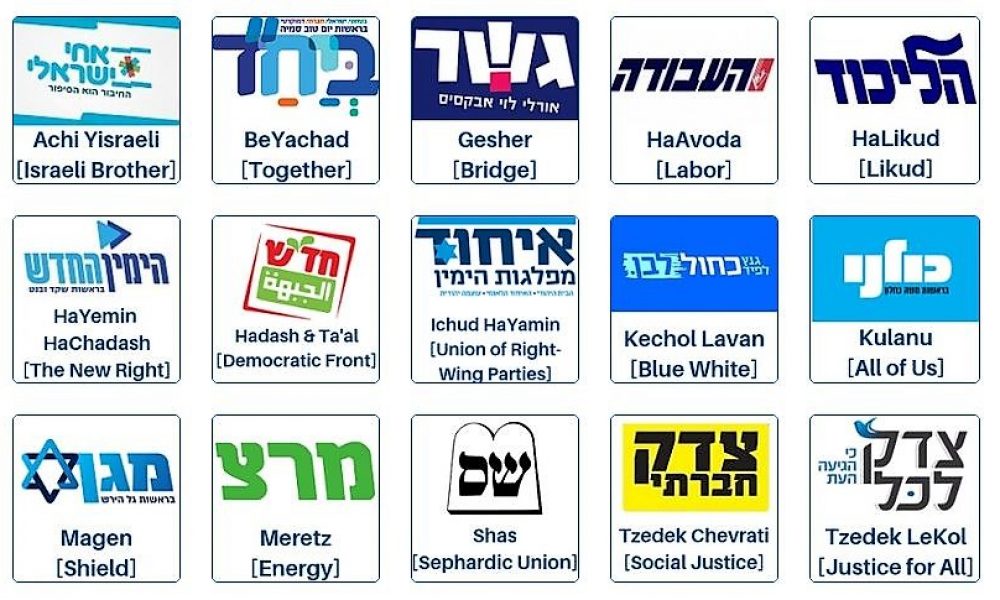 Elections for the 21st Knesset were actually scheduled for November 2019. In the spring of 2015, Prime Minister Benjamin Netanyahu had formed a coalition of 61 out of 120 Members of Knesset. During summer 2016, Avigdor Lieberman joined the coalition with another five members of his party “Israel, Our Homeland” and became Minister of Defense.

In late 2018 Lieberman resigned from the coalition because Netanyahu had not allowed him to crack down on Hamas in the Gaza Strip more harshly. As at the beginning of the legislature, the government then still had a 61-to-59 majority in parliament. Nevertheless, it opted for new elections scheduled for April 9, 2019.

On the website of the Central Electoral Committee of the Knesset[1] 43 political parties stand for election. About six million Israelis are eligible to vote.

Except for the generally known established parties Israelis may vote for a “New Horizon with Dignity,” “Responsibility for Founders,” “Social Security,” “Social Justice,” “Real Democracy,” “Hope for Change,” the “Unity of the Sons of the Covenant,” an “Eternal Covenant,” “the Pirates,” a “Bridge,” “Identity,” “Education,” “Reform,” “Human Dignity,” a “Protective Shield,” or even for “Simply Love” or “You and I” – or they are being told that they stand at a “Crossroads”, should start “From the Beginning” and proceed “Straight Forward”, because “the Whole of Israel are Brothers” and “the Land of Israel is Ours.”

All terms of this snake phrase which are in quotation marks are names of official Israeli parties. In addition, the “Equals,” the “Pensioners” and a number of Arab and Orthodox Jewish groups yearn for seats in Israel’s parliament.

The website www.israelvotes2019.com strives to pave the way in English for Israel-interested foreigners through the political jungle of the Jewish state. The website explains the Knesset, key players, political parties and why there are new elections at this point of time.

IsraelVotes2019 suggests “religion & state,” “economy,” “settlements,” “the future of Jerusalem,” “Israel & the Middle East,” and a “Palestinian state” as “Key Issues” for these elections. Comparing them to the real existing discussion in Israel’s society, the idea might arise that the website intends to remind Israeli voters what should be the key issues from a Western perspective, rather than mirroring reality in Israel to the West.

For months the big media platforms in Israel have been occupied primarily with one question: Who is able to lever Netanyahu? – Undoubtedly, Benjamin Netanyahu is the longest-serving prime minister in the history of the modern state of Israel. Furthermore, it is unquestionable that Israel is a democracy. Consequently, Netanyahu is the most popular head of government Israel has ever had.

A self-critical left-leaning Israeli newspaper notes that if it is against “Bibi,” as Netanyahu is popularly called, one even accepts the risk of being guilty of a democratically disguised military coup. In a martial atmosphere, partly dressed in leather jackets and with consistently grim look that forbids any fun, former Chiefs of Staff Benny Gantz, Gabi Ashkenazi and Moshe Ya’alon pose on the Golan Heights for a group photo, civil war torn Syria in the background. Part of the leadership of their new party “Blue-White” is former show master Ya’ir Lapid. Israel’s leftists, liberals, peace activists, and human rights advocates seem to have no fear of being under suspicion of militarism and authoritarianism in hoping for a liberation strike against King Bibi from this Rambo trio with a political clown.

Allegations against Netanyahu because of corruption or breach of trust are barely an issue any more. The decision on whether he be charged is finally postponed until after the elections. To the chagrin of all Netanyahu-doom-prophets, all coalition partners of the Likud had previously announced that they would be ready to continue the coalition even if Netanyahu were charged.

Traders in the Jewish bazaar Mahaneh Yehuda make fun of how long and above all how quickly (given the lack of humidity in the Holy Land) Netanyahu would have to smoke in order to obliterate all the cigars in a dignified manner that he supposedly has received for a positive coverage on the YNet news site (which he never received according the these traders). They agree, the media are trying hard to finish off their popular Prime Minister.

Looking for serious points of discussion among Israeli voters, the old question arises as to whether Israel, as a nation-state of the Jewish people, can at the same time be a state for all its citizens. “Arabs are not second-class voters,” President Re’uven Rivlin reminds his acting Prime Minister, who is only too happy to be carried away by statements that may easily be interpreted as racist.

The predominance of the Orthodox as a representative of Judaism in Israel is called into question. And journalists in search for topics are speculating about whether the number of homosexual MKs could double from two to four in the next election, or that the proportion of women among Members of Knesset might be reduced.

The question of whether marijuana should be legalized reveals quite unfamiliar new frontlines in the Israeli parliament. All of a sudden the far-right Zehut party finds itself in the same camp with the communists of Meretz and Hadash, in favor of legalizing marijuana, against the Arab parties, the Union of Right-Wing Parties and United Torah Judaism.

The central issues from a European perspective – the peace process, the relationship with the Palestinians, the two-state solution – are not really an issue in Israeli election campaigns 2019. The positions of those politicians, who have a real chance of being elected, are virtually indistinguishable in this regard.

No Israeli enjoys being an occupier. Nobody considers it to be okay, being shot at and being terrorized from the Gaza Strip. No one is happy about the plight of the Arab population there. However, no one really knows how to reduce the military pressure on the Palestinians, as long as their attitude towards “the Jews” does not change.

Officially, the startup www.israelvotes2019.com is concerned about explaining Israel’s situation to the world. However, the website may also be just a desperate call for help from Israeli voters to the international community for guidance in its national political chaos. After all, a key feature of the site is that non-Israeli visitors to the site can vote themselves.

A comparison of the party list of www.israelvotes2019.com with the official list of political parties on the site of the Knesset Central Electoral Committee reveals a number of differences that are difficult to explain without propagandistic ulterior motives.

For example, Yoav Gal Tamir’s party is presented as a “Da’am – Workers Party,” “a strongly left-wing Jewish-Arab political party which calls for political and social revolution in favor of workers’ rights, the nationalization of key industries, Jewish-Arab coexistence, and gender equality.” The Central Election Committee, in contrast, lists the same party under the name “Green Economy – One State,” a party which obviously rejects the two-state solution in the second part of its name.

The party with the official name “The Land of Israel is ours” appears on IsraelVotes24 under the name “For Second-Class Citizens.” From the presentation it is not clear at all whether the party’s concern are second-class citizens, such as the elderly, terror victims or inhabitants of remote areas, or whether it wishes to make those second-class citizens to whom (from their point of view) the Land of Israel does not belong.

The “Party of the Biblical Bloc” (as stated on the website of the Knesset Central Electoral Committee) is listed as “Ketz = End” with IsraelVotes24. Whether this party is about the end of the world, the end of the United States or the end of American Jewry is not clear. Anyway, the orientation guide for those foreigners interested in Israel explains: “The Israel Bible Bloc Party aims to prepare Israel for mass immigration of American Jews to Israel that will take place after Islamic Jihadists take power in the United States.”

At the head of the Bible Bloc Party stand an Orthodox Jew, an Arab Christian, an Israeli Christian with Dutch roots and a messianic Jew.

Jihad in the West

Party leader Dennis Avi Lipkin has written books under the pseudonym Victor Mordecai in the 1990s, titling “Is Fanatical Islam a Global Threat?” or “Christian Revival for Israel’s Survival.” He calls the fact that IsraelVotes24 lists his party as “Ketz = End” a “stupid mistake” without any deeper meaning. Further, he affirms, his party never prophesied an Islamic fundamentalist takeover of the United States of America.

However, it is true that he foresees an Islamic holy war (“jihad”) in the Western world that will cause mainly American Jews to immigrate to Israel. And, he affirms: “We have to be prepared for such a scenario.”

Lipkin’s party colleague Dr David Friedman is the first Messianic Jew in the history of the modern state of Israel to run for a mandate in the Knesset. He laments a “rapid growth of anti-Semitism worldwide.” This phenomenon is particularly noticeable in “Belgium, England, Germany, Switzerland, Sweden, the Netherlands, France, Denmark, the USA and Canada”.

Friedman demands full rights for the Christian community, Messianic Jews and Druze in Israel and propagates a “no land give-away” policy. The Bible Bloc Party is committed to “stand up against corruption in our political system” and “for reform in our hospital system”.

Friedman describes “abortion on demand” as “simply immoral” and complains: “Our leading hospitals have up to 15 percent of their patients hospitalized in the hallways. The ratio of nurses to patients is appalling. The nurses are overworked and understaffed. The meals are not nutritious. The bathrooms are often not working.”

Shockingly precise, Friedman, who has no chance of being elected to the Knesset, describes one of the burning issues of the modern Israeli society. The world famous Israeli health care system may only be so extraordinarily effective because it scares away every Israeli citizen that is still able to run and avoid being treated by it. Unfortunately, that too seems to be not a campaign issue for those who could make a real change.