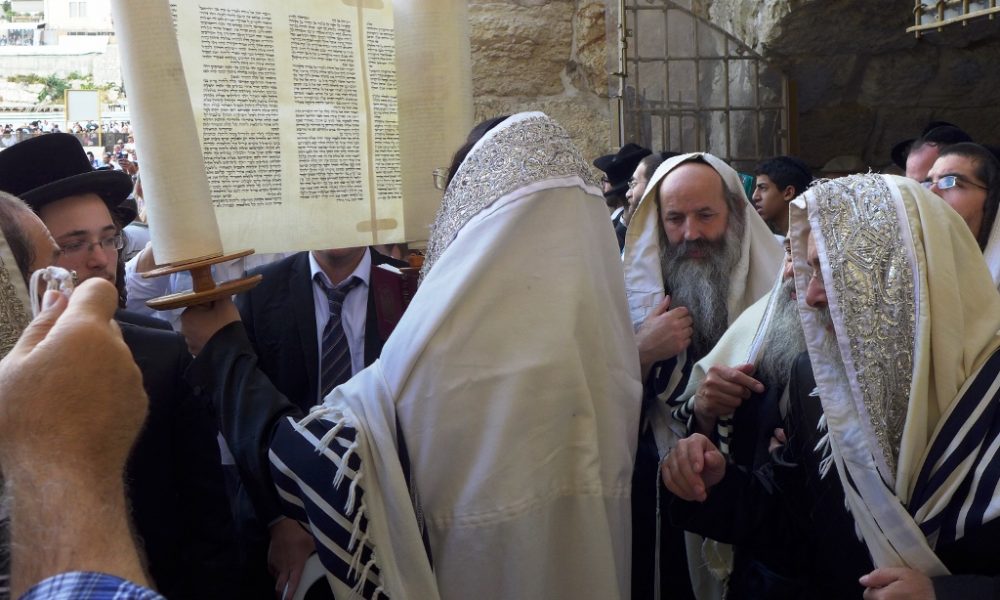 In verse 3 the psalmist turns to Zion, addresses this city directly in the present tense[1], and states: Matters of consequence are being spoken in you,… “In you, Zion, words of weight are said, significant sayings are being expressed. There the Sanhedrin, the high council, is meeting”, Metzudat David[2] explains.

Radak[3] draws attention to the fact that it is not the presence of the scribes and scholars that determines the character of the city. On the contrary, the location decisively influences the people there: “You are exalted above all countries in many ways, as it is written about the inhabitants of Jerusalem, ‘they dwell on the navel of the earth’ (Ezekiel 38:12). Thus, the air in Jerusalem is better than in any other place for the health of the body and for wisdom, as Psalm 48:3 says about Mount Zion, ‘a beautiful sight the joy of the whole earth’; or as our sages have taught[4]: ‘The atmosphere of the land of Israel makes wise.’”

The country shapes the thinking

Indeed, the Word of God does not have equal effect on people everywhere. There was a good reason for God leading Abram first from Ur of the Chaldees into the land of Canaan before revealing certain issues to him. The Torah from Mt Sinai could never have been given to the Hebrews at the pyramids of Giza.

It is no coincidence that the vast majority of biblical prophets heard the living God speak on the barren mountain ridge located between the Eastern Mediterranean and the Jordan Rift Valley. In marked contrast to the water-rich areas along the river Nile, in Mesopotamia or even in Central Europe or North America, the Land of Israel shapes the character and thinking of its inhabitants like no other country according to the basic message of the Bible, “sola gratia”, “by grace alone”.[5] In no other location of this planet man is able to experience so unmistakably that he cannot tear himself out of the swamp of sin, guilt and death by his own efforts as in the Land of Israel.

The Origin of the Word of God

Also Messiah, the Word of God in human form, would not have been able to “come into the flesh”[6] at any other place than in Zion. Therefore the people of Israel had to return to their land at least in part before the coming of Messiah. The land of Israel has a crucial hermeneutical function that has been shamefully neglected by Christian theology – with devastating consequences.

Rashi[7] paraphrased: “It is you, O Jerusalem, in whom words of weight, of honor, of content, are spoken from the mouth of the Holy One, praised be He!” Again Isaiah 2 comes to mind, where you can read from verse 3 onwards: “Many nations will come and say: ‘Come, let us go up to the mountain of the Lord, to the house of the God of Jacob. He will teach us His ways. We will walk in His paths. For out of Zion comes Torah, the Word of the Lord from Jerusalem.’”

Samson Raphael Hirsch[8] concluded: Jerusalem “is the place in which He is intelligently and effectively recognized through the ‘Word’ which had been deposited there by Him and which is kept alive and nurtured in accordance with His instructions.”[9] Here the entire theology of the Word of the Holy Scriptures is rooted on one mountain.

And – Rashi asks – “what are these weighty words?” – “That you are called the city of the [only true and living] God for ever!” (Metzudat David). “For God has chosen [Jerusalem] to make His glory dwell there” (Radak). Therefore Messiah Yeshua spoke of Jerusalem as “the city of the great king”.[10]

Why does God care so much about what is spoken in the city? Why are words so important?

Yeshua taught[11]: “Suppose a tree is good. Then also its fruit will be good. Or suppose a tree is rotten. Then also its fruit will be rotten. Because the tree is recognized by its fruit. You brood of vipers, how can you speak good things when you are evil? The mouth speaks of what the heart is full of. The good man brings good things from his good treasure. The evil man brings out evil from his evil treasure. I tell you: For every fruitless word that men speak, they will have to give account on the Day of Judgment. For by your words you will be justified. And because of your words you will be judged.”

What a person talks about, especially when he feels unobserved or talks thoughtlessly, shows what is inside him. What is spoken in a city bears witness to the essence or character of the city.

But do these statements correspond to the harsh reality of today’s Middle East?

I think whoever takes the time to get to know Jerusalem will actually learn to sense something of the realism of these words. God’s word opens up in a completely new way to him who lets the millennia-old stones, the history, but also the people of Jerusalem have their say. Many things remain hidden from us because we do not understand their languages, traditions, customs and mentality, or we do understand only with difficulty. Jerusalem remains a journey of discovery even for those who live there for years and decades.

Whoever lives in Jerusalem for an extended period, however, also will get to know the dark corners of this city, the fanaticism, the doggedness and the often sinister zeal that keeps the inhabitants of Zion captive. He will stand helplessly before the abysses that separate people in this city from one another, confronting the hatred, irritability and ruthlessness that result from all that which characterizes life in the capital of the Jewish state and makes it so terribly difficult. He will begin to understand why nuns and monks hide behind thick walls of their monasteries and rabbis with their students in prayer houses and Talmud schools.

In view of this situation, the prophetic aspect of Psalm 87 becomes relevant. Then the author of this psalm, together with the one who prays this psalm, must proclaim the perspective of God in spite of the encrustations of human failure, exactly because it is invisible to the natural eye.

The Jewish teachers knew and still know about the state of Jerusalem, which is marked by suffering, sin, war, strife, dissension and death that dominate our world. All too often in the past centuries they have experienced it terribly at first hand. And they know about the rebellion that has to be associated with the name “Korach”.

Defiantly they hold the Word of God against reality, if, for example, Malbim[12] stated: “Through you the Lord dwells permanently in the midst of Israel”. Psalm 46:5 underlines this statement, as does Psalm 84:2[13] quoted by Amos Hakham.[14] Contrary to all appearances, the Apostle Paul holds that the “Israelites” who are “cursed and separated from Messiah,” are still the ones to whom belongs “the glory,” that is, the glorious presence, the “shekhinah” (שכינה) of the one, true and only living God (Romans 9:3-4).

Attractive for all people

By proclaiming that Zion is the city of God, however, the psalmist does not only interpret the present situation from a spiritual point of view. He also casts a glance into the future, foreseeing the pilgrimage of the nations to Zion. People of all cultures, mentalities, skin colors, ways of thinking and languages will come up to Jerusalem.

It is not the nature of the city or its inhabitants that attracts the gentile peoples, but what is spoken in it, the Torah, the instruction, the Word of God, which emanates from it. In this respect, too, the decisive factor is not the nature, behavior, speech or even activism of human beings, but the decision and action of the one true, living God alone.

Sela. “End of announcement. End of the discussion. Period!” – Malbim interprets this word, about whose meaning even the rabbinical interpreters have no final clarity.

[2] One of two Bible commentaries by David Altschuler, who lived in Javorov in Galicia in the 18th century. While his interpretation “Metzudat Tziyon“ explains individual words, “Metzudat David” illuminates the meaning of the text.

[3] Rabbi David Ben Yosef Kimchi (1160-1235) was the first among the great exegetes and grammarians of the Hebrew language. He was born in Narbonne, southern France. His father died early, so David was brought up by his brother Moshe Kimchi. Radak permitted philosophical studies only to those whose faith in God and the fear of heaven were firmly established. Publicly he dealt with Christians and attacked primarily their allegorical interpretation of Scripture and the theological claim to be the “true Israel”.

[4] In the Babylonian Talmud, tractate Baba Batra 158b.

[7] Rabbi Shlomo Ben Yitzchak (1040-1105) or “Rabbi Shlomo Itzchaki,” was born in the northern French town of Troyes, studied for ten years in Mainz and Worms, before he returned to Troyes, where he distinguished himself as a judge and teacher. In his last years he witnessed the persecution of Jews during the Crusades. Rashi is one of the extraordinary interpreters of Jewish writings and the very first who explained the Bible and the Talmud comprehensively. His basic concerns were to bring Holy Scripture to the people, to promote the unity of the Jewish people and the theological confrontation with Christianity. Rashi made a sharp distinction between “pshat” (literal interpretation) and “drash” (allegorical interpretation), whereby the pshat gives the rash. His interpretation of Scripture has decisively shaped the reformer Martin Luther. Although his comments are still standard today, he often writes “I do not know”.

[8] 1808-1888, came from Hamburg and served as Chief Rabbi in Oldenburg, Aurich, Osnabrück, Moravia and Austrian Silesia. As a distinguished representative of Orthodoxy, he was an outspoken opponent of reformist and conservative Judaism. Hirsch attached great importance to the study of all Scripture. From 1851 he was rabbi of the separatist Orthodox „Israelitischen Religions-Gesellschaft“ (“Israelite Religious Society”), engaged in education and published the monthly magazine “Jeschurun”. Hirsch had a great love for the land of Israel, was at the same time, however, an opponent of the proto-Zionist activities of Zvi Hirsch Kalischer. He is seen as one of the founding fathers of the neo-orthodox movement.

[12] Meir Leibusch Ben Yehiel Michael Weiser (1809-1879) came from the Ukraine and worked as a rabbi, Talmudist, biblical expositor and preacher. During his time as rabbi in Kempen, Posen, (1845-1859) he was nicknamed “Kempner Maggid”. As a relentless opponent of the reform movement and the Jewish Enlightenment, the Malbim came into conflict with Jewish and non-Jewish authorities, was slandered and arrested. He officiated as chief rabbi of Romania, Königsberg and Mecklenburg. His biblical interpretation focuses on the “depth of language” and the “basic meaning of the text” “based on precise linguistic rules.”

[14] 1921-2012, became known in Israel as champion of the first Israeli and worldwide Bible quiz. His handicapped father, Noah Hakham, was a Jewish Bible teacher who had moved from Vienna to Jerusalem in 1913. He had not sent the only son to a public school for fear of a speech impediment. Rather, he himself had trained him in extremely poor conditions. The Bible quiz in August 1958 revealed Amos’ genius and established his legendary career as interpreter of Scripture. His expositions are only available to me in Hebrew.