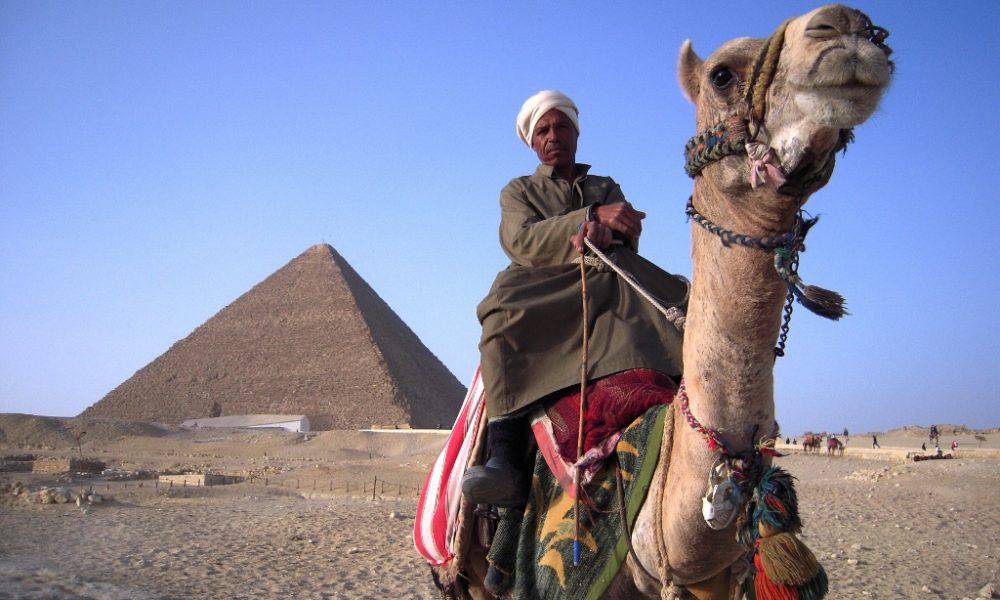 “The Lord loves Zion” (verse 2). That is why there, in the city of the one, true, living God, significant words, “words of weight” are spoken (verse 3).

Amos Hakham[1] classifies the following statements, “Now, Zion is responding to that, answering …”[2] Another possibility would be for the Lord to continue speaking through the psalmist. In any case, the statement for the reader of Psalm 87 comes from the direction of Zion, because the Lord lets His word go forth from Zion (verse 4): I recall Rahab and Babel …

“Rahav” (or “Rahab”) is Egypt. Avraham Even-Shoshan[3] connects the root of the word “רהב/rahab” with the meaning “to be frightened, to be afraid” (פחד/pachad), “to impress, to create an impression/admiration,” “to rise up, to be proud/lofty,” “to dare/to be daring,” “to be/to become [something] significant.”[4]

“Rahav” represents “greatness,” “strength,” “power,” “might,” “pride” and “arrogance.” “Rahab” is the name of a legendary creature, a sea monster in the shape of a crocodile. It is therefore correct when interpreters[5] claim that this single word sums up the arrogance[6] of “the proud, defiant great power of the South.”[7]

Metzudat David[8] further quotes Isaiah 3:5 as evidence for Egypt’s character traits that are contained in this name. There it is said that “within the people one oppresses his neighbor; the young rise above[9] the old and the despised above the learned.”

“Bavel” is the equivalent in the northeast of the world power Egypt, located southwest of Israel. “Babylon” is the part of Mesopotamia which is located in the central and southern part of what is now-a-days Iraq. Just like Egypt, Babel is an ancient superpower[10] whose wealth, glory, beauty and opulence are legendary,[11] based first and foremost on the fact that – in contrast to the land of Israel – it “dwells by many waters.”[12] Like “Rahav-Egypt,” “Bavel-Babylon” was a center of wisdom, art, culture and civilization[13] in antiquity, and therefore also was referred to as “tender and spoiled” (Isaiah 47:1).

The story of the “Tower of Babel” (Genesis 11:1-9) already alluded to the fact that Babylon was seen as the land of unlimited possibilities. There, in Mesopotamia, a person was able to develop and make a name for himself completely on his own. There, he was able to build a tower, “the top of which extends up to the sky” – made of self-made bricks, not stone.[14] God Himself reaches the conclusion: Now “nothing they plan to do will be impossible for them” (Genesis 11:6; NIV).

Right into the New Testament, Babylon is referred to as “the great whore”, the “mother of prostitution and of all the horrors on earth”.[18] Egypt is known to this day for its overwhelming tombs, the pyramids. Likewise, Babylon is a land of bondage and death (Ezekiel 37:12-13).

Rashi[19] observes the sharp, even painful contrast that the psalmist bundles here with a few sketchy statements: At the same time, while it is said about you, Jerusalem, Zion, that you are the city of the one, true God, beloved, called and gifted like no other place with the presence and the word of the living God … – practically in the same breath – I recall those felonious dark superpowers Egypt and Babylon … to those who know me.

Those “who know me” are not just people who “know about” the existence of Zion and may have over and above that taken notice of the fact that some god is particularly interested in this place and the people who are connected to it. Scripture here talks about “beloved ones and friends”, observes Metzudat Tziyon and refers to Proverbs 7:4. There the fatherly teacher recommends to his disciple: “Call upon wisdom: You are my sister! And as ‘trusted friend’ (מֹדָע/moda‘) you should address insight.”

Jeremiah 31:30ss characterizes the new covenant that God will make with the house of Israel and the house of Judah. God will put His Torah inside them and write his word and intention on their hearts. He will be so much “their God” and they will be “His people” to such an extent that no one anymore will have to challenge the other: “Know the Lord!” Rather, the prophetic word of the Lord proclaims “that all will know me, from the smallest to the greatest. For I will forgive their wrongdoings and never again remember their sins.”

Both terms, the “friend” (מֹדָע/moda‘) in Proverbs 7:4 and the “יֹדְעָי/yod’ai” of Psalm 87:4, are derived from the root of the Hebrew word “ידע/yada‘”, which also appears in Jeremiah 31:33. The background to this concept is a “knowing relationship”; an exclusive, intimate love affair that otherwise only a man and a woman can have, who are committed to each other for a lifetime. This “knowing” occurs for the first time in Genesis 4:1. There it describes the relationship between Adam and Eve, a bond of trust from that will bear fruit.

Who are these confidants of the God of Israel?

Should the “יֹדְעָי/yod’ai” be “Rahab and Babel”, as Luther[20] or Keil/Delitzsch[21] translate, then this short Hebrew term indicates a breathtaking revolutionary change in the nature and behavior of the arch enemies of God and His people.

Rashi sticks to the simple sense of the word: “I call Rahav and Bavel to mind with those” or “for those who know me,” and then adds: “so that they may offer the evening sacrifice [long sought and predicted].” As biblical evidence for this addition, he refers to Isaiah 66:20.

In order to understand what Rabbi Shlomo Yitzchaki saw in these first four Hebrew words of Psalm 87:4, we have to consider the context, which closes the scroll of the prophet Isaiah in a final crescendo (Isaiah 66):

Once again the prophet saw the painful rebirth of Jerusalem. As a consequence he challenged his readers: “Rejoice with Jerusalem! Cheer in her all you love her! … Thus says the Lord: Look, I spread ‘Shalom’ to her like a river, like a raging flooded stream the honor of the Gentile nations. Your babies are carried in the arms and caressed on their knees. As a mother comforts, so will I comfort you. You shall be comforted with Jerusalem” (verses 10,12-13).

Jerusalem will be restored. Its inhabitants are being repatriated from all over the world. Jerusalem will be comforted. In exactly that time, however, inseparable from the text and the word of promise to Jerusalem, those who did not originally belong to Jerusalem are also being comforted. They connect themselves with this city, its character, its fate and suffering.

Isaiah foresees terrible judgment. “In fire the Lord will judge, and by His sword all flesh and a great multitude are the Lord’s fallen” (verse 16). The rebellion against the living God has a self-destructive effect. But God’s objective is not to destroy the fallen world. Rather, He comes “to gather all the Gentile nations and tongues so that they may come and see My glory” (verse 18).

For this purpose he raises a sign among them and sends those who are saved to the Gentile peoples “to Tarshish, to Pul and Lud, to Moshchey Keshet, Tubal and Javan, and to the distant islands” – into the entire world as it was known at the time – “those who have not heard My message and have not seen My glory. They will proclaim My glory among the Gentile nations” (verse 19).

The residents of Zion as an evening sacrifice

Undoubtedly, this is the scenario Messiah Yeshua painted when he spoke of “this gospel of the kingdom being preached to all mankind as a testimony to all Gentile nations” (Matthew 24:14).

Rashi had this situation in mind when, based on “Rahav and Bavel” in Psalm 87, he quoted verse 20 of chapter 66 in the prophet Isaiah: “They will bring all your brothers from all the Gentile nations as a מִנְחָה/minchah (evening sacrifice) for the Lord.” The Gentile confidants of the Lord are bringing the Lord’s people back to Jerusalem.

The מִנְחָה/minchah is a tribute to the newly crowned Messiah and King (compare 1 Samuel 10:27). The Egyptians and “Iraqis” mentioned here not only fear the Lord, they know Him. This goes much deeper, reaches much further, definitely is a much “higher designation” than “those who fear me”.[22] As confidants and beloved ones, these gentiles allow themselves to be actively involved in the plan of the God of Israel.

[1] (1921-2012) became known in Israel as champion of the first Israeli and worldwide Bible quiz. His handicapped father, Noah Hakham, was a Jewish Bible teacher who had moved from Vienna to Jerusalem in 1913. He had not sent the only son to a public school for fear of a speech impediment. Rather, he himself had trained him in extremely poor conditions. The Bible quiz in August 1958 revealed Amos’ genius and established his legendary career as interpreter of Scripture. His expositions are only available to me in Hebrew.

[3] (1906-1984) was born as Avraham Rosenstein in Minsk, Belarus, and immigrated to the British Mandate of Palestine in 1925, where he changed his name to Even-Shoshan. The linguist and lexicographer became known for his eight-volume המלון החדש (“New Dictionary”) of the Hebrew language and a concordance of the Hebrew Bible. In 1978 he received the Israel Prize for his research of the Hebrew language. In 1984 Avraham Even-Shoshan died in Tel Aviv.

[8] One of two Bible commentaries by David Altschuler, who lived in Javorov in Galicia in the 18th century. While his interpretation “Metzudat Tziyon“ explains individual words, “Metzudat David” illuminates the meaning of the text.

[14] The difference to Exodus 20:25 is striking. There Israel was allowed to build an altar. But any visible personal contribution, such as the fact that the stones are hewn for the construction of the altar, would desecrate the altar.

[19] Rabbi Shlomo Ben Yitzchak (1040-1105) or “Rabbi Shlomo Itzchaki,” commonly called “Rashi,” was born in the northern French town of Troyes, studied for ten years in Mainz and Worms, before he returned to Troyes, where he distinguished himself as a judge and teacher. In his last years he witnessed the persecution of Jews during the Crusades. Rashi is one of the extraordinary interpreters of Jewish writings and the very first who explained the Bible and the Talmud comprehensively. His basic concerns were to bring Holy Scripture to the people, to promote the unity of the Jewish people and the theological confrontation with Christianity. Rashi made a sharp distinction between “pshat” (literal interpretation) and “drash” (allegorical interpretation), whereby the pshat gives the rash. His interpretation of Scripture has decisively shaped the reformer Martin Luther. Although his comments are still standard today, he often writes “I do not know”.