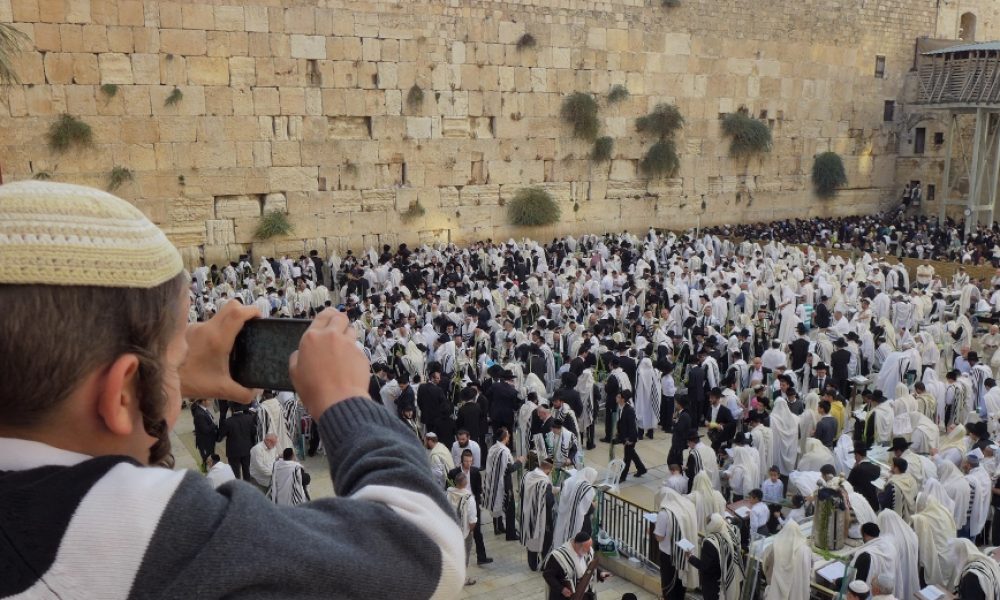 Half a century ago the city of Jerusalem was returned to Jewish sovereignty after nearly 19 centuries of gentile dominion. On June 7, 1967 Mordechai Gur was able to broadcast: “The Temple Mount is in our hands!” As commander of the 55th paratroopers brigade Motta Gur lead the Israel Defense Forces (IDF) that penetrated the Old City of Jerusalem to be the first to visit the Western Wall and the Temple Mount.

Jerusalem, however, is not just any town. It is the city of the Jewish people. Throughout millennia of being dispersed all over the globe, pious Jews prayed daily several times for Jerusalem to be rebuilt and for their own return to Zion. Every Jewish bridegroom breaks a glass towards the end of the wedding ceremony, vowing: “If I forget you, O Jerusalem, let my right hand forget its skill! Let my tongue stick to the roof of my mouth, if I do not remember you, if I do not set Jerusalem above my highest joy!” (Psalm 137:5-6).

“Next year in Jerusalem!” is not just the last exclamation on Passover eve. It is the very yearning of the nation of Israel throughout thousands of years of dispersion, expulsion, persecution, unspeakable suffering and violent death. Jerusalem, actually, is the very foundation of the existence of the Jewish people. Where ever and whenever its members forgot about this focal point of their existence they perished, i.e. they forgot about their identity as Jewish people within one or two generations thereafter and assimilated.

Jerusalem cannot be seen or understood as an isolated settlement. “Mountains are round about Jerusalem,” as the psalmist observed (Psalm 125:2). Zion is the very heart of what Ezekiel (36:1) called “the mountains of Israel”. The re-unification of Jerusalem returned the heartland of Israel, biblical Judea and Samaria, to Jewish sovereignty. The cry “The Temple Mount is in our hands” signified, that for the first time in nearly 2000 years most of the promised land was in Jewish hands again, not just Judea, Binyamin and Samaria, but also the Gaza strip and the whole of the Sinai Peninsula in the south. In the north Israel had conquered the Golan heights, biblical Bashan, on sight of Damascus.

Already in September 1967 the “children of Kfar Etzion” returned to what was left of the village their parents had founded earlier in the 20th century. They had been massacred, if not evacuated, in May 1948.

The ancient Jewish quarter in Jerusalem’s Old City had been laying waste after the capitulation of its Jewish defenders and inhabitants on May 28, 1948 to Jordanian forces. Soon after the return of Israeli sovereignty in 1967, the reconstruction process began, preserving the archeological treasures that had been uncovered in this area. In 1970 the government of Israel started to connect the enclave of Mt Scopus with Jewish Jerusalem, by founding Givat HaMivtar, followed by other Jewish neighborhoods on grounds that are considered “East Jerusalem”.

In October 1970 Kfar Darom in the southern Gaza strip was re-founded, after having been destroyed during the War of Independence in the late 1940ies.

In a constant struggle that continues to this very day, Jews settled the land, that was until 1967 occupied by Jordan. Most interestingly, nobody between 1949 and 1967 claimed Palestinian sovereignty over these territories, which are nowadays so emotionally disputed, when they were occupied by the Jordanians. Today between 650.000 and 800.000 Israelis, about ten percent of Israel’s population, live beyond the so called “Green Line”, the armistice demarcation lines after 1949. These lines were never declared “borders”, following the explicit wish of Israel’s Arab neighbors, who did not want to recognize borders of the “Jewish entity”.

Many Israelis, however, have mixed feelings about Jerusalem and the mountains surrounding her. Already, the spies, sent out by Moses before entering the Land of Canaan for the first time, had realized: This is not just a land that “flows with milk and honey”. The promised land is also “a land that devours its inhabitants” (Numbers 13:27,32). Sure enough, the crying paratroopers at the Western Wall in June 1967 mirror the feelings of millions of Jews towards Jerusalem and its center, the Temple Mount. At the same time, however, the ambiguity that comes with Jerusalem and the land of Israel hunted the Jewish people as long as it endeavored to return to its ancient homeland.

Already in 1949, when David Ben-Gurion declared Jerusalem to be Israel’s capital, he did so against resistance from his own cabinet. His foreign minister Moshe Sharet even resigned because of this difference of opinion. In old Stalinist fashion Ben-Gurion simply ignored the resignation. Thus, Jerusalem became the capital of the modern State of Israel, which had (just for the record!) never ever any other capital.

Yes, Shlomo Goren, the Chief Rabbi of the IDF, blew the shofar, proclaiming the return of the Jewish people to its most holy places. At the same time, however, Israel’s defense minister Moshe Dayan is said to have complained: “What should we do with this Vatican?” Instead of celebrating Israel’s return to the heart of her faith, Dayan was concerned about Muslim sensitivities, considering the Temple Mount as a “foreign religious artifact” that would cause only problems.

Indeed, the government of Israel seems to have been surprised by its military success in 1967. Looking back after 40 years of Jerusalem’s reunification, Emmanuel Navon wrote in 2007: “In truth, Israel never really took control of Jerusalem’s holiest site, the Temple Mount.” A fact, which ten years later seems not to have changed.

As much as leftist Israelis and the vast majority of the international community suspect and accuse Israel of a “settlement policy”, on closer inspection, such a clearly declared and logically pursued “policy” is lacking and has been lacking for the past half century. It is rather a movement among the people of Israel that was set into motion right after the six-day-war in June 1967, a movement that quite often was hindered and even fought by Israel’s politicians. In retrospective it was Israel’s “rightist” governments, that hindered the settler movement effectively, if not evacuating them, whereas those, who were less suspected of being “pro-settlement”, made the return of the Jewish people to the heartland of Israel flourish.

The people of Israel is being torn apart internally, because the return to Zion cannot be realized without a bitter taste at the same time. The Six-Day-War did not only re-unite the Jewish people with the heart of Judaism, Jerusalem, Judea and Samaria. At the same time, it made those who were originally driven from their ancestral homeland, oppressed and persecuted, themselves occupiers and responsible for the uprooting of millions of Palestinian refugees. This perspective and aspect of the existence of modern Israel is dominant in the perception of many Jewish Israelis today, not to mention Palestinians and the international community.

The result of this first and foremost internal struggle is, that Israel has never really succeeded in defending her historical connection and claim to the geographical heart of Judaism. Muslims and especially Palestinians on the other side, have spared no effort and proved themselves not shy of any lie in distorting historical facts, when it came to denying the Jewish link and legitimate claim to the Temple Mount, Jerusalem and the heartland of Israel. In October 2016, the international community backed the Muslim-Palestinian side, by UNESCO officially reminding Israel that “Al-Haram Al-Sharif” is “occupied Palestinian territory”. On Christmas eve of the same year, the UN Security Council condemned Israel over its so called illegal settlement policy. Thus, Jerusalem and its surrounding mountains remain a bone of contention for the Jewish people itself. And the city seems to become more and more the “burdensome stone” for the whole world, of which the prophet Zechariah (12,3) spoke some two and a half millennia ago.