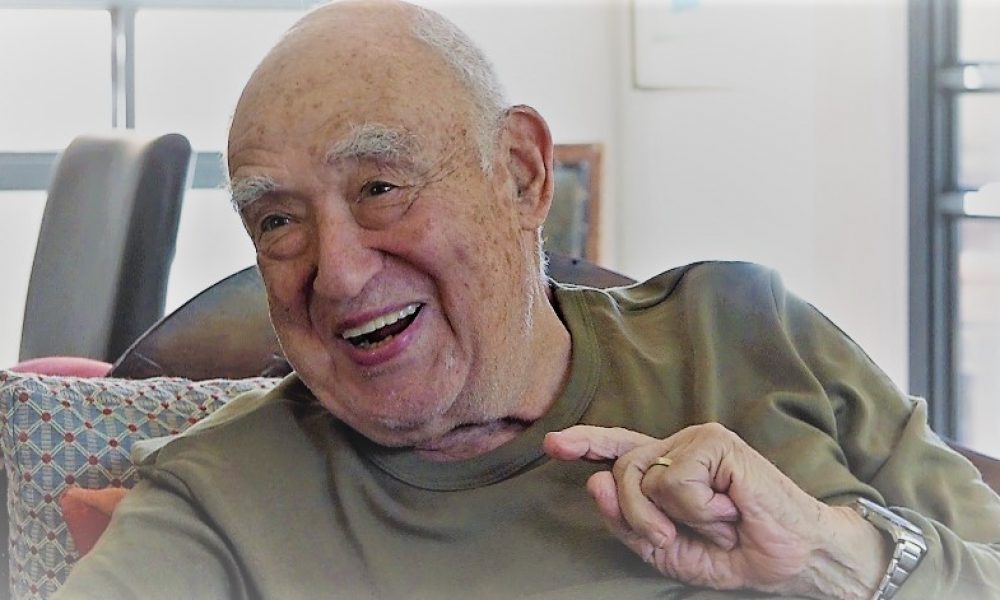 On January 7, 2018, Hugo Marom, Famous Israeli pilot and founder of Israel Aircraft Industries passed away. The Czech-born Israeli was 89 years old. A few months before his death he visited his beloved Moravian city of Brno for the last time. Upon his return, he consented to tell his amazing story to the team of Fokus Jerusalem. “Do you know how I found out that something was wrong with me?” said the kind optimistic elderly gentleman. “During my trip, I was invited to a flight simulator and crashed twice.”

Hugo had been named after his maternal grandfather Hugo Kubje. The fact that the Jewish family Kubje has their roots in Bohemia is documented by the chronicle of the town of Sušice in an entry from the 17th century. There it is reported that a Jew by the name Kubje had to be punished for throwing stones at a statue of St. Mary.

Hugo Marom was interested in history. That’s why his thoughts kept wondering back a few centuries or decades. However, what occupied his mind most during the last years of his life was the thought of the parents who rescued their children from Nazi persecution by sending them on the so called “Kindertransporte” (German for “children’s transports”) to foreign countries.

It was Britain that accepted most of these children. Recently, however, the history of Jewish children that were sent to Denmark has come to light. “How could intelligent people send their three- to fifteen-year-old children, without any language skills, to a foreign country to unknown people?” Hugo was haunted by this question. Ultimately, he came to the conclusion that it was an immensely heroic deed.

In his opinion, the real heroes of this chapter of World War II history were neither Sir Nicolas Winton, who organized the railway transports from Prague to London for Czech Jewish children, nor Wilfrid Israel, a wealthy German Jew, who saved the lives of ten thousand children from Germany. The true heroes, according to Hugo Marom, were the parents of these children. He was moved by the idea of building a memorial to these parents at the main railway station in Prague, from where he himself and his brother were “transported”. His idea was accepted and on May 27, 2017 he was able to participate in the unveiling of the memorial together with other “Winton’s children”. One of his last wishes was to erect memorials for the parents of those Jewish children, also at German train stations from where the “Kindertransporte” left.

Talking about his Czech homeland, Hugo always spoke about “the Republic”. He was from a generation, which did not take the independence of Czechoslovakia for granted. Gladly he remembered his teacher, who started the school hours in a mixed Christian-Jewish class with a prayer: “We pray to the one and only God.” The pupils then prayed together in awe for their parents and “father Masaryk,” Czechoslovakia’s first president Tomáš Garrigue Masaryk.

On his father’s side, Hugo Marom came from the Maisel family, who has a thousand-year tradition in what is today the Czech Republic, especially in Prague. “In 1968, I received the book ‘Thousand Years of Judaism in Bohemia’,” Marom smiled. “It contained the dedication: ‘To The last of the Maislicans.’”

His grandfather, Rudolf Maisel, moved from Prague to Brno, the capital of Moravia. Hugo’s brother was named after this grandfather. Originally, they were three boys in the family. But one died tragically at the age of two. After that, Hugo and Rudi begged for a new brother. The family then took in a Catholic boy from an orphanage. However, this foster brother was taken away by the German Gestapo, the secret police of the Nazis. A Jewish family was not allowed to raise a Christian child.

Hugo Marom remembered well an argument between his parents . For a long time His father did not want to believe that the Czech Jews were in danger of being threatened by the German Nazis. He used to say: “If Hitler wants to expel the Maisels, who have been living here for a thousand years, he would have to drive out all the Czechs.” The mother, a Viennese native, spoke perfect German and Czech. She read Hitler’s “Mein Kampf” and convinced the family that Hitler indeed wanted to make Europe “judenrein” (German “cleansed of all Jews”).

Because of contacts to England, the parents then managed to secretly organize the departure of their children to England. Only years later did Hugo understand why his mother did not travel with them Prague to say goodbye. After his departure they never saw each other again.

When Hugo and Rudi arrived in London, nobody awaited them; nobody was there to pick them up. For many hours, the two little boys sat at the station until a taxi driver took pity on them and invited them to “fish and chips”. Never had anything tasted so good. This Englishman then took them home for a few days, until he was able to secure a place for them in a children’s home for German-Jewish children.

The atmosphere at that time was so anti-German that no British family was willing to welcome in their home German-speaking children. Even Hugo and Rudi fought with the “German” boys, until their father admonished them in a letter: “Stop beating each other. You are all Jews after all!”

For years, Hugo had to walk with shoes that were way too small, cut off at the front. He was poor, but he learned well. At a cadet school, he acquired the skills needed for flying. Then he also took an exam as an English teacher.

Many Jews, not just those from Czechoslovakia, changed their names after immigrating to Israel. So did Hugo Maisel and also Hugo’s friend Josef Platchek, later known as Joe Alon. His story as told by his close friend Hugo is quite unbelievable: “We lived in a three-story house. There were no lifts at the time. That’s why the wealthy people lived downstairs on the first floor. In our case, these were the owners of the house, the Platchek family. I became friends with their son Josef.”

There were no lifts at the time. That’s why the wealthy people lived downstairs on the first floor. In our case, these were the owners of the house, the Platchek family. I became friends with their son Josef.”

When these two young men returned from England after the war, Hugo studied at the Technical University. Josef had been less successful at school and had learned goldsmith. One day, a Czech-speaking Israeli showed up at the university in order to recruit young Jewish men for a pilot course. Hugo had already been to the cadet school and was accepted immediately.

In order to get into the course, Hugo still needed a medical certificate from Prague. The evening before his scheduled departure Josef appeared, who had just received his goldsmith certificate. He stayed with his friend overnight. The next morning Josef notices Hugo getting ready.

“Where are you going?” He asked. – “To Prague,” replies Hugo, “I need a medical certificate for a pilot course to be able to join the Israeli army.” – “You want to go without me?” Josef asks horrified. “They would never accept you,” says Hugo, “You can barely count to a hundred and your uncle would not let you go to Israel anyway.” Almost all family members of the Maisel and Platchek families had been killed in concentration camps. Having a relative was something very special.

“We did not know then,” Hugo continues, “that Joe had been born in Israel. He had come from the Kibbutz Bet Alfa, founded by Czechoslovakian Jews. The birthplace noted in his passport was of the kibbutz ‘Ein Harod’written in English: ‘In Hrod’. Now there are many places in the Czech Republic called ‘Hrod’. That’s why we thought Joe was born in one of these towns. In reality, he was born in the land of Israel. His family had returned to Czechoslovakia when he was two years old.”

In short: Josef persuaded Hugo to take him to the medical check. The two drove to Prague and received the medical certificate. Ultimately, both became successful pilots of the Israeli army. The military career led Josef Platchek, who was later called Joe Alon, to the United States. In Washington, he was shot dead in 1973 as Israel’s military attaché.

Originally, Hugo and Josef wanted to join the Israeli army with a few hundred Jewish volunteers for six months. During the War of Independence, the young state was fighting for its survival. Hugo recalls how staff captain Ocelka said: “Jews are known to be smart. How could you agree to go to Palestine for six months? You are perhaps six hundred thousand Jews against one and a half million Arabs. How do you want to survive six months?”

Among the Jewish volunteers Hugo met his wife Marta. It was love at first sight! Their marriage lasted 65 years and they had “together” – as he used to say – “twelve great-grandchildren. And the thirteenth and fourteenth are on their way.”

Hugo Marom was part of the mosaic that Israeli Prime Minister David Ben Gurion once spoke about: “If there had not been military aid from Czechoslovakia, there would be no State of Israel.” The turning point in the War of Independence came when the Egyptians were already on their way to Tel Aviv. Hugo explains: “When Nasser came to the bridge near Ashdod, suddenly great Spitfires flew in and attacked him. Big airplanes with a Star of David on them. The Egyptians had absolutely not expected such a thing. They were so surprised that Israel had an air force at all, that they immediately gave an order to retreat.”

All the pilots who came to Israel at the time stayed in the country. Their task was to protect the southern border. Hugo Marom flew in the air force until 1954. In 1997 he finished 43 years of reserve duty as a pilot. He became commander of the flight school in Sirkin and later test pilot. Together with Josef, he founded the Israel Aircraft Industries. From 1964 until the end of his life he worked in his own company, that specialized in building airports. Of the aircraft that were originally brought from Czechoslovakia to Israel, Hugo Marom was later able to sell thirty Spitfire aircraft in a bargain to Burma. Israel got some shiploads of rice in exchange.

Until the end, Hugo Marom was engaged in the Association of Israeli Friends of the Czech Republic and thought about how he might arouse interest in his country of birth among the second and third generations of Czechoslovakian Jews. He never stopped loving the Czech Republic.