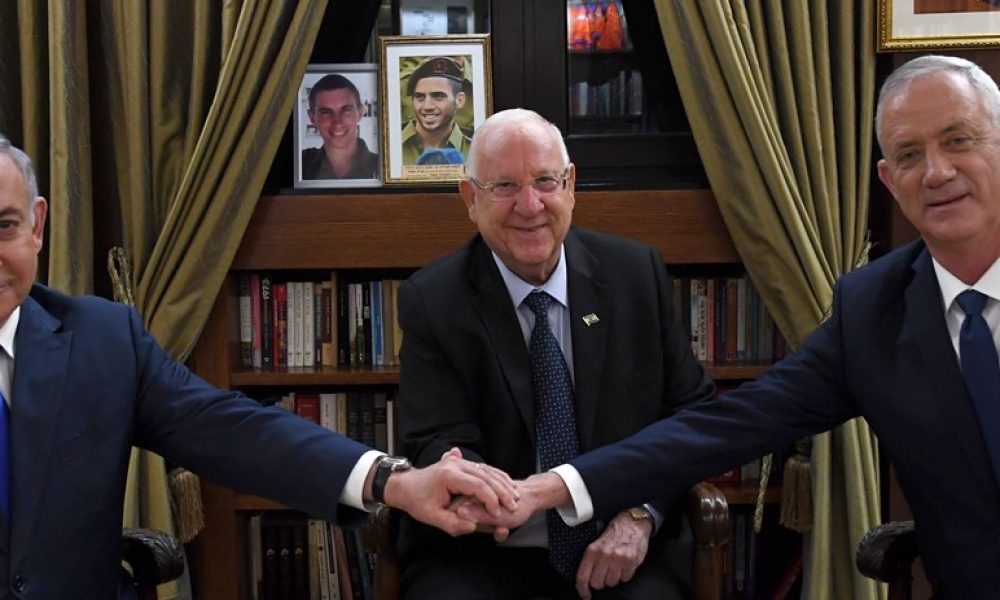 In fact, the Israeli people expressed its opinion quite clearly on Tuesday, September 17, 2019, when it had to vote for its parliament for the second time in one year. 73 seats of 120 Knesset mandates went to secular parties of the center: 33 to “Kachol Lavan” of Benjamin “Benny” Gantz, 32 to the Likud of Benjamin “Bibi” Netanyahu, and eight to “Israel Beiteinu” (= “Israel Our Home”) of Avigdor Lieberman.

These members of parliament form a clear majority. Their basic positions on questions of economy and social policy, security and foreign policy, with regard to the relationship to the Palestinians, the settlements in Judea and Samaria, a two-state solution, a peace process with the Arab world or Iran are practically non-distinguishable from the outside. When Netanyahu announced a few days before the election that he would annex the Jordan Valley after the election, Gantz tweeted spontaneously: “Me too!”

How should an Israeli vote…?

Looking at this center of Israel’s political spectrum, an analyst before the elections moaned: “How are you going to vote as an Israeli today if Netanyahu’s challengers from the left accuse him of being too gentle on Palestinians who launch missiles from the Gaza Strip on Southern Israel while the Right is evacuating settlements?”

As a matter of fact, Netanyahu’s hesitation towards Hamas seems to be a key reason for his de facto loss of nine seats compared to the last elections in April.

The Orthodox parties more or less got their usual mandates: The Sephardic Schass nine and the Ashkenazi Torah Judaism seven. “The Right” under Ayellet Shaked received also seven seats and the combined Left a total of eleven, of which six go to the socialist “Labor-Gesher” and five to the communist “Democratic Camp.”

Among the electoral winners is the “United List” of anti-Zionist Arab parties with 13 mandates, which will be the third largest force in the 22nd Knesset. Like Lieberman’s Israel Beiteinu they gained three mandates in comparison to the preceding legislature. The Right was able to add two seats, the Orthodox parties and the left-wing Meretz each one mandate, while the Social Democratic Labor Party was able to keep its six seats.

The big losers of this election were Netanyahu’s Likud, which, along with Moshe Kachlon’s “Kulanu” (= “We All”), lost eight mandates and Gantz’ Kachol Lavan, which lost two seats. Kulanu and Likud had joined the recent elections as a common list.

Despite these losses, it is true for the political center of Israel: None of the orthodox or extremist parties is automatically being able to tip the balance of a constructive government formation. Good news is that right-wing extremist racist “Otzmah Yehudit”, led by lawyer Itamar Ben Gvir, failed at the 3.25% threshold.

“The people agree that the new head of government should be a security expert with an Ashkenazi background between the ages of 60 and 70, who bears the name Benjamin,” one newscaster summarized the election result. But exactly at this point seems to be the core of the problem. Because the two Benjamins are also in agreement that under no circumstances the other may be head of government.

Benjamin Netanyahu is supported by the 55 parliamentarians of the Likud, the orthodox parties and the Right. Immediately after the announcement of the election results, he had also announced that this party bloc will only appear as a whole in coalition negotiations and will not be divorced.

Benny Gantz represents the biggest party in the Israeli parliament. However, only the 44 Knesset Members of Kachol Lavan, Labor and the Democratic Camp support him reliably.

After some back-and-forth, the United Arab List proposed him as the future head of government to the President – but without the three members of the Balad party. Thus, Gantz is supported by 54 MKs.

However, the Arab, anti-Zionist MKs of the United List are a real problem for Gantz if he aims to form a coalition with an absolute majority of at least 61 MKs. Lieberman vehemently rules out any collaboration with the 13 anti-Zionist Arabs. Likewise, the entire “Netanyahu bloc”.

From a purely mathematical and theoretical-ideological point of view, it would be conceivable that the eight ultra-orthodox MKs of the Torah Judaism might join a left-wing coalition under Gantz. Above all, these ultra-Orthodox Ashkenazis have social interests and a critical distance from secular Zionism and the modern state of Israel.

However, they are firmly embedded in the “Netanyahu bloc” and will guard against spreading uncertainty for long-term considerations. In addition, the “Gantz Coalition” includes a number of declared seculars who have great difficulties with the Ultras.

Thus, despite all the doom and electoral losses, Netanyahu remains politically the most powerful contender for the post of Israel’s head of government. By law, President Reuven Rivlin must delegate the formation of a government to the Member of Knesset who is supported by most MKs as prime ministers. After that it will be exciting, if at all and if then how Netanyahu will succeed in putting together an effective government.

Avigdor Lieberman so far has not proposed anybody for the post of prime minister. If he joined Netanyahu, that would give a whopping majority of 63 MKs – but also more or less exactly the same constellation as before the last and penultimate elections. With the difference that Liebermann would be decisively stronger now.

Similarly, theoretically, the Labor Party under Amir Peretz could help the Netanyahu bloc achieve an absolute majority of 61 mandates.

The grand coalition called for by President Reuven Rivlin, as well as by Avigdor Lieberman, faces a number of hurdles. On the one hand, there is the public vow of the Netanyahu bloc of Likud, Orthodox and the Right to be indivisible.

Among the followers of Gantz are militant seculars, such as the former journalist Yair Lapid, who, like Lieberman, has committed himself to pushing back the influence of the Orthodox in the Jewish state. However, Ariyeh Deri, head of the ultra-orthodox Sephardic Schass party, has already called for reconciliation.

Above Netanyahu also hovers the sword of Damocles in form of three open indictments, which may lead to legal proceedings. In negotiations for a grand coalition, not only will the person of Netanyahu in general be a bone of contention, but also his personal immunity.