“If I forget you, O Jerusalem…” – Why Jerusalem is so important to the Jewish people 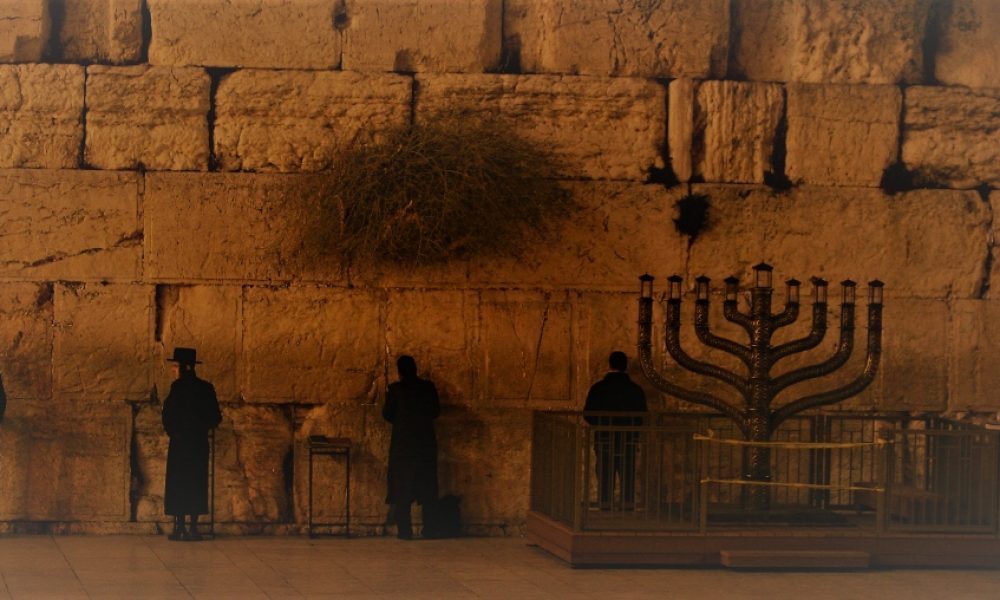 In prayer you have turn in the direction of Jerusalem. This is what every child learns in school, at least in Israel. The old King Solomon taught so at the inauguration of the first Jewish temple. The biblical prophet Daniel put his life at risk because he prayed three times every day at an open window in the direction of Jerusalem. Therefore the Talmud teaches, “A man should not pray save in a room which has windows” (Berakoth 34b).

For thousands of years, orthodox Jews all over the world have prayed to God after every meal: “Establish Yerushalayim, the holy city, quickly in our days!” The course of their whole day, all their worship services, the cycle of the year and the biblical feasts of Judaism are imbued with the longing for Jerusalem. The consciousness of Jews, who are faithful to their Bible and their tradition, is entrenched by what Psalm 137 expresses: “By the rivers of Babylon, there we sat down, yea, we wept when we remembered Zion” (verse 1).

In Babel all options are open. As in Egypt, in Babylon man is able to work the ground, “to sow your seed, and water it by foot, as a vegetable garden” (Deuteronomy 11:10). If men do not use up their strength with discord or leave the ground fallow because of laziness, Babylon is the land where success is guaranteed. The regular water supply by the streams Euphrates and Tigris was, next to the oil – which is mentioned already in Genesis 11:3 – the foundation of the wealth of Mesopotamia. Thus “Babel” became the biblical byword of might, wealth, glory, luxury, beauty, wisdom and arts. Babylon dwelt “by many waters” and therefore was “abundant in treasures” (Jeremiah 51:13).

The Bible depicts Babel as embodiment of culture and civilization, called “tender and delicate” (Isaiah 47:1), where man could “make a name for himself” (Genesis 11:4). In Babylon he was able to prove to himself, the world and God what he was able to create in his own strength. In view of all the achievements of “the glory of kingdoms” (Isaiah 13:19) even the Creator himself had to admit, “…now nothing they propose to do will be withheld from them” (Genesis 11:6). The biblical Babylon is the “land of boundless opportunities,” in sharp contrast to “Zion.”

Already in the desert Moses alerted the Israelites to the fact that “the land of promise,” in contrast to Egypt and Babylon, “is a land of hills and valleys, which drinks water from the rain of heaven” only (Deuteronomy 11:11). In the land of Israel a person can invest all his diligence, know-how, ability and hard work in the ground. In the end he still remains dependent on God’s blessing, the rainfall. In Israel man cannot do anything out of his own strength, because it is “a land for which the Lord your God cares” (Deuteronomy 11:12). In Babylon or Egypt the diligence and ability of the worker is key to success. In Israel, in contrast, everything depends on God’s attention.

Furthermore, when the Israelites “sat by the rivers of Babylon,” Zion was “plowed like a field,” Jerusalem was “heaps of ruins,” and “the mountain of the temple [was] like the bare hills of the forest” (Jeremiah 26:18). Nothing was left of the glory of the city of God. The worst expectations of the prophets had become cruel reality. “Judah mourns, and her gates languish; they mourn for the land, and the cry of Jerusalem has gone up” (Jeremiah 14:2). The people were “cast out in the streets of Jerusalem because of famine and the sword.” They had “no one to bury them – them nor their wives, their sons nor their daughters…” (Jeremiah 14:16).

Just a few crazy people are weeping as they think of Zion even while they are at “the waters of Babylon.” Are they crazy? Or are they the ones who realize what even the destroyed Zion means in God’s eyes? What plans and purposes the living God has with this “forgotten and of all the world forsaken little village in the Judean mountains”, as a Christian pilgrim in the middle of the 19th century characterized it?

The spiritual leaders of the Jewish people knew how easily “Zion” can be forgotten. They made every effort to keep the memory of Jerusalem alive among the Jewish people. Therefore a Jewish woman was never to wear all her jewelry at the same time. Thus, even the most beautiful house had to be incomplete at some place, preferably near the entrance, by, for example, not plastering a part of the wall, leaving it bare. For this reason, in the most lavish banquet one or two dishes were to be left out. All this was done to exclude the possibility that earthly completeness and beauty could obscure the fact that only in the rebuilt Zion will complete joy be possible.

Ancient Jewish scholars were aware of the fact that Jerusalem has nothing humanly attractive to offer, neither the “fruits of Gennesaret” nor “the thermal springs of Tiberias” (Pesahim 8b). Only eyes opened by the spirit of God and hearts soaked in the love of God are able to comprehend Jerusalems beauty which is so praised in talmudic literature. Therefore did the Jews so consciously hang their harps upon the willows in the land of Babylon (Psalm 137:2). Until today, there is no instrumental music to be heard in orthodox synagogues for this very reason.

The Babylonians who held the Israelites captive did not serve the God of Israel themselves. However, they were also not part of those dictators who try to force their own culture and belief on those whom they conquered. They encouraged the Jewish exiles to bring along and develop their own culture and religion: Bring forward what God has entrusted to you and enrich our own culture! Introduce to us, what forms your life and your convictions! “Sing us one of the songs of Zion!” (Psalm 137:3). After all, the basic collection of Jewish tradition, the Babylonian Talmud, has its origin in the land of the Chaldeans.

Babylon is the land of boundless opportunities not only in the material realm, but also a market of boundless religious possibilities. In Babel everything is permitted, everything is tolerated. No one will have to deny his god, his faith, his experience, wishes or imaginations in favor of a uniform, publicly regulated state religion. Tolerance is Babylon’s all pervasive religion. Here at the latest it becomes clear that it is only “crazies” or “stubborn fundamentalists” who cannot avoid taking the Bible literally and responding to this well-meaning encouragement: “How shall we sing the Lord’s song in a foreign land?” (Psalm 137:4).

Had the captives in Babylon been “real Christians” and not “Jewish stubborns,” they had jumped at this chance of singing God’s praises. Their remembrance of Jerusalem would have been spiritualized into a “principle Zion”, their desire would have been existentially re-interpreted and re-directed onto the politically correct tracks. Only in the quiet of their upper rooms would they have opened the “doors of their hearts” in the direction of (the theological concept) “Zion”…

But the singer of Psalm 137 was not able to forget, not even “by the rivers of Babylon,” that joy can be complete only if Jerusalem is rebuilt, if the people of Israel and the land of Israel are re-united, i.e. if the city of Jerusalem in the land of Juda is able to serve the purpose destined for it by God. They knew, “If I forget you, O Jerusalem, my right hand will forget her skill” (Psalm 137:5).

Whenever God is doing something decisive, biblical terminology ascribes it to “his right hand.” With his “right hand” the Creator “has stretched out the heavens” (Isaiah 48:13) and redeemed Israel out of Egypt (Exodus 15:6,12). From Moses’ point of view, “the right hand” of the Lord is the origin of the Torah (Deuteronomy 33:2). Neither military power nor tactical shrewdness helped the Israelites conquer the land, “but it was your right hand, your arm, and the light of your countenance” that gained possession of the land (Psalm 44:3; 78:54).

The believing Israelite knows that whenever God helps, saves or redeems, i.e. whenever he “creates salvation”, he will do it “by his right hand.” The believer is aware of God’s promise, “I will uphold you with My righteous right hand” (Isaiah 41:10), and responds, “My soul follows close behind You; Your right hand upholds me” (Psalm 63:8). God’s “right hand” plants, gives pleasure, strengthens, reigns and judges “full of righteousness.” And if God turns against his people, this means that “he has drawn back His right hand” or that “with His right hand, like an adversary, He has slain” them (Lamentations 2:3,4).

This Jewish Old Testament language carries over into the New Testament. The apostles say of the Messiah Jesus, “Him God has exalted to His right hand to be Prince and Savior, to give repentance to Israel and forgiveness of sins” (Acts 5:31). The living God swears “by His right hand.” “The right hand” of God can even represent him. We thus read, “the voice of rejoicing and salvation is in the tents of the righteous: The right hand of the Lord is exalted; the right hand of the Lord does valiantly!” (Psalm 118:15-16).

Furthermore, Jewish rabbis see a connection between “my right hand” (yemini) and the term “leha’amin.” This Hebrew verb is translated “to trust,” “to be faithful,” “to have confidence in someone” or “to believe.” It designates the relationship between God and man. Therefore it is not surprising if biblical terminology some times sees the “right hand” as the means by which God establishes a relationship with a human being and communicates with him.

In Psalm 137 the “right hand” translated literally “forgets” its function by “forgetting Jerusalem.” Like a withered leaf it dries up and falls off. This punishment would mean that a man forfeits with his “right hand” every possibility of doing something that could be termed “success” or even “fruit” in the eyes of man or in the eyes of God.

YES BUT – some Bible students might object – can you state so absolutely that whoever forgets Jerusalem will forfeit every opportunity for success? And didn’t God, according to the very beginning of Scripture, create by His word? SURELY, that is true! And therefore the “Zionists” at “the rivers of Babylon” did not forget to add, “Let my tongue cling to the roof of my mouth – If I do not exalt Jerusalem above my chief joy” (Psalm 137:6).

According to the original Hebrew text, Jerusalem is not only to be the “chief joy”, or – in order to remain in the framework of biblical terminology – to be the “head of my joy,” but any possibility of doing something, be it by means of the “word” or by the “right hand,” shall be taken away if I do not exalt Jerusalem “above the head of my joy,” i.e., if Jerusalem does not transcend all imaginable earthly and spiritual joy.