Palestinian Schoolbooks: Demonizing and Delegitimizing the Jewish State of Israel 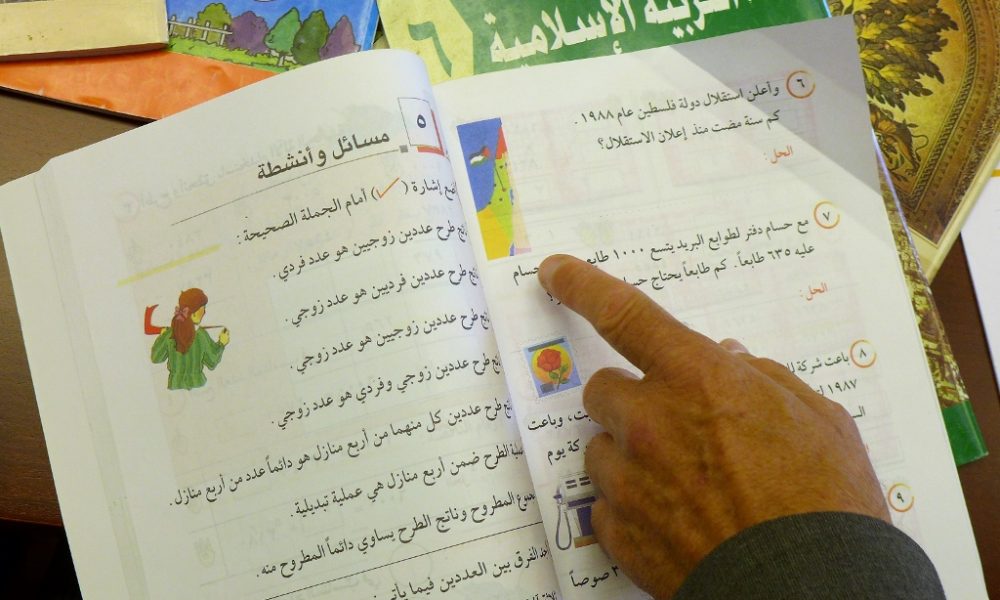 “I want my children to serve in the Israeli army!” This sentence does not come from a Jewish Israeli, but from a Palestinian Arab, from a Muslim, whose roots are in a Hebron clan, which is completely unsuspected of any sympathy for Israel. The father of seven children has grown up in a part of East Jerusalem. He escaped from there a few years ago because he and his wife could no longer bear the anti-Jewish incitement and hatred of Israel with which their children were indoctrinated at the official Palestinian schools. Now the nine-member family lives in one of the “Jewish” settlements spreading around Jerusalem.

“Useless” for “the Palestinian cause”

“Useless” for “the Palestinian cause” became Jamal, as I would like to call him here, during eight years of residence in Germany. There he learned that it is not normal for children to be beaten up by their teachers at school. In Germany, he has learned that hatred of Jews, anti-Semitism and racism should not be socially acceptable. But it may also be to some extent due to a natural predisposition for Jamal to have a wide, obviously affectionate heart for every person he encounters – even for the Jewish settlers, among whom he has now found a new home.

Jamal and his family do not have a glorified image of Israeli society. They experience the tensions between the different ethnic groups and mentalities in daily life, especially against Arabs and Palestinians. Therefore, he wants to be called now by a Hebrew-sounding name and, furthermore, tries to change his surname, which all too obviously betrays his origins.

If Palestinians want to become Israelis

Jamal has learned from Israelis that it is necessary to fight if you wish to achieve something. That’s why he wants to open a way for his children to serving in the army of the Jewish state. At the latest there they will realize that this family is not an isolated case. In the Israeli army serve many non-Jews, including no few Arabs who side with Israel and envision their future in it. Increasingly Palestinians recognize the anti-Jewish incitement in their schools as a real problem, perhaps even as the root of their misery. Human rights activist Bassam Eid is the one who has recently made the most public statements.

Incitement in the Palestinian school system

It is not new that the Palestinian educational system spreads hatred against Israel and the Jewish people. Dr Arnon Groiss is research director of the Institute for Monitoring Peace and Cultural Tolerance in School Education (IMPACT-SE). For almost two decades he has been analyzing textbooks of the Palestinian Authority, Egypt, Syria, Saudi Arabia, Tunisia and Iran. The website of the Institute www.impact-se.org shows that it not only critically scrutinizes Arab and Muslim textbooks, but sets the same standards for Israeli and Jewish teaching materials, especially for ultra-orthodox literature. 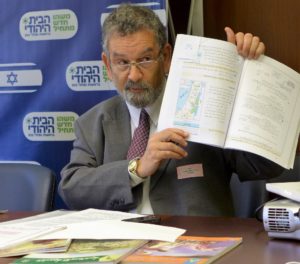 On the maps of Palestinian textbooks cities like Tel Aviv or the holy places of Judaism cannot be found. The Western Wall (“Wailing Wall”) in Jerusalem, the Tomb of the Patriarchs in Hebron, and Rachel’s Tomb in Bethlehem are presented as Muslim holy sites which the Zionists unlawfully claim for themselves. Six million Jewish Israelis simply do not exist on the demographic maps which Palestinian students draw their information from.

The United Nations as engine

“Peace Starts Here” UNRWA proudly proclaims as motto of its activities. “UNRWA” stands for “United Nations Relief and Works Agency”. The organization was founded on December 8, 1949 exclusively for the Arab refugees from the Israeli-Arab conflict and is now headed by the Swiss national Pierre Krähenbühl.

However, instead of promoting a peaceful solution to the Israeli-Palestinian conflict, even in educational programs for Christians, for example, when Old Testament stories are being told, there are no Jews at all. Any historical or religious connection of Judaism to Jerusalem is simply ignored in UNRWA textbooks: “Jerusalem is an Arab city, built by our Arab forefathers thousands of years ago. Jerusalem is a holy city for Muslims and Christians.”

There is “Palestine” – a state that never ever really existed in history – on the maps, but no “Israel”. The entire territory of the State of Israel, which has existed for seven decades, is “occupied territory.” If “Israel” is mentioned, then not as a legitimate state, which – anywhere, within whatever limits – would have a right to exist. “Israel” is alluded to only as an illegitimate “occupation power” and above all as the source of much evil.

In Palestinian textbooks Jews have no rights whatsoever, Groiss observes, “but only greedy ambitions.” The journalist and academic concludes that UNRWA’s textbooks promote a campaign of demonization and delegitimization against the Jewish people and their state.

And not enough. Using language from traditional Islam, which speaks of “jihad” and “martyrdom,” the liberation of Palestine by force is being propagated. In some places the children are actually being incited to “martyrdom”.

Propagating a “right to return” underlines that “all of Palestine belongs exclusively to the Palestinians”, whose number is estimated at up to nine million. Jews have no rights in the country they occupied by force in 1948. Ultimately, the implementation of a right of return, as demanded by the Palestinians, would mean the end of a Jewish state of Israel. It de facto denies a right of the Jewish people to self-determination. The use of poetry and songs emphasizes on an emotional level that the return of the Palestinian people to their country is inevitable and without alternative.

In 2016, the Palestinian Authority began publishing new textbooks. After examining 118 textbooks, Groiss recognized in July 2018 that through the revision of the Palestinian study material nothing has changed concerning the delegitimization and demonization of the state of Israel, as well as the incitement to violence and the lack of any education towards a peaceful solution.

In some places even a radicalization may be recognized, for example, if the Jewish citizens of the State of Israel are referred to as “strangers” or “intruders”. “Israel” is nowhere mentioned as a sovereign state in the updated versions. Instead, “Palestine” continues to be portrayed in the place of Israel on the map as a sovereign state in the region. The demonization of the Jewish people in Palestinian textbooks actually begins already with the political rivalry between the Prophet of Islam and his Jewish contemporaries on the Arabian Peninsula. Jews of the 21st century are referred to as “devil’s aides”.

Meanwhile, further investigations independently confirmed the findings of Arnon Groiss. The Israeli journalist Caroline Glick reaches the same conclusion as Jamal, the Palestinian, who refuses to send his children to Palestinian schools anymore for this very reason: “UNRWA schools indoctrinate Palestinian children to hate Israel and Jews and to seek their annihilation. UNRWA employees throughout the Middle East praise terrorists, praise Nazis, and call for the annihilation of the Jewish people.” And this whole scenario has been taking place under the guise of a so-called “peace process” for the past three decades, being funded by Europeans and Americans who are being called even by high-ranking Israelis “willingly blind”.